End of an Epoch and Treasury Distribution

Since we have a lot of new players, we want to make sure you understand the game dynamics and profit from the game as much as possible.

When an epoch ends, you don`t loose anything – your progress is carried over to the next epoch.

The game consists of epochs. Every epoch represents one round of the game. During each epoch a temple treasury builds up and is won when this epoch ends.
Afterwards a new epoch starts with a new treasury.
Very important: When an epoch ends, the players that haven`t won, also didn`t loose!
The progress they made (Toys collection and done sacrifices) are carried over to the new epoch.

You can go on playing and aim for the Treasury designing your own strategy.
Helpful to know: In order to win, a player needs to get “enlightened” (meaning sacrifice all 127 different Toy types/ 1 turn for each sacrified Toy!). After a player became enlightened a whole cycle (around 8 hours) has to pass (without new enlightenments!) before the epoch is won. During that time other players that are close can also become enlightened. (If there is a new enlightened player another cycle needs to pass).  There are up to 7 winners per epoch.

There is no fixed amount of time/ cycles for an epoch. Some epochs are short, others are longer.

Who gets the Temple Treasure?

What happens when a new epoch starts?

The melting recipes are reset (i.e. the players need to find out again what token type is generated by combining two other) This makes every new epoch unpredictable and incentivises strategic hoarding of TOYS tokens by traders.
The treasury is paid out to the winners and the stakers.
Important: you do NOT lose the Toys or progress that you made when a new epoch starts – both is carried over to the new epoch.

More than 1 winner? What is the sacrifice index?

The sacrifice index is the sum of the serial numbers of sacrificed Toys. If there are several winners of an epoch (a maxium of 7 winners per epoch), the Temple Treasure is split amongst them according to their sacrifice index.  Lower index means that the player has sacrificed an older collection and is thus eligible for a bigger cut of the winnings. Means older Toys are more valuable!

Pro-tip: If you want to become proclaimed in a future epoch (maybe because  you want to wait for a bigger treasure), then wait with your last sacrifices until you are ready so that you are not enlightened. Because once you sacrifice 127 Toys and get the Enlightenment Token, somebody will proclaim you as soon as a whole cycle passes without new enlightenments.

Important: Players that didn´t get enlightened, do NOT lose the Toys or progress that they made when a new epoch starts – both is carried over to the new epoch. 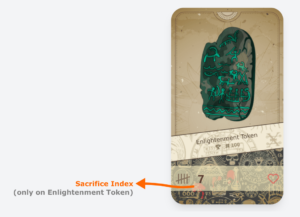 Collect and Play
Collect toys and play the highly addictive game to earn big chunks of the growing treasury!
Trade
The Toys gain value with time. Trade them at for example at our Marketplace “Minted Vodka”  and invent unique profit-strategies!
Stake
Earn yields by staking your GAT tokens at the game’s temple!