A lot happened in October – if you didn´t had the time to follow GAT Network´s activities closely here is a retrospective for October: 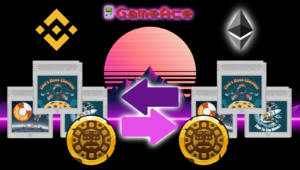 The waiting was definitely worth it! The new bridge infrastructure that has been developed  will allow us to easily add new chains and serve as a basis for upcoming Minted Vodka features in a multi-chain environment.

We have added 3 initial networks to the bridge: Binance Smart Chain, Ethereum and Polygon. Other networks can be added fast and with relatively low effort in the future. Ethereum and Polygon were selected to allow our NFTs to be sold on OpenSea, which supports both networks. Since Polygon is more than 1000x cheaper than Ethereum, we expect that most of the assets will be bridged there.

The bridge has been integrated into the MintedVodka and can be accessed from the “Bartender Tools” or with this direct link: https://minted.vodka/tools/bridge

Currently, there are two assets enabled for bridging to test the infrastructure:

Both assets can be bridged in any direction across all the currently enabled networks. Be aware that the cost to bridge an asset (apart of the gas fees to start the bridging) differs depending on the target network.

The first Game Ace cartridges have been bridged and offered for sale at OpenSea!

What Minted Vodka features would be possible with this bridging technology ?

Read the full article on the bridge here

GAT Network is at Medium now – check it out and follow https://medium.com/gat-network

MintedVodka was always planned as a central piece of GAT Network, which is just a small corner of a much bigger meta-verse. Metaphorically speaking, we see the Binance Smart Chain like a crypto-country in a world of many other “countries” like Ethereum, Avalanche and others. Following the same metaphor, the current GAT Network would be like a canton or province within the Binance Smart Chain: a conglomerate of cities, villages and dwellings representing each separate project in our network.

Similarly, we see MintedVodka not just like a local market in our “province”. We strive to become a central place, on the edge of several networks, where users from everywhere come together and interact: trade assets, exchange goods and services, discuss and hold events, discover new projects, play street games, etc.

Read full article on our vision for Minted Vodka here

Minted Vodka is central to the GAT Network, all other projects stem from this central project, it is core as a marketplace for assets in each other games, and offers cross-network trading potential for GameAce NTFs.

The games on GAT Network are fun, and have a lot of potential to bring in other players, but for them to be true Play-to-Earn there needs to be some sort of external funding to maintain the ecosystem, this is where Minted Vodka can help.

Minted Vodka has a huge potential in the NFT trading space, offering features rarely found elsewhere at an exceptionally low price to use the platform. The flexibility of trading, including multiple items, even of different types on either side of the trade is exceptionally powerful. Even something so small as being able to set a title and description is rarely seen on other NFT exchanges.

In the next months we will focus on the development of our NFT Market. Important features like

and more will be available and attract new users. Of course we will keep an eye on new use cases for GAT in this context.

And also growing traffic will mean more fees that flow into the Alchemy Toys treasury as you know.

Read more on the strategy for Minted Vodka here

At Minted Vodka GAT holders were able stake their GAT and earn the NFT. It was very popular – over 30% of all existing GAT were staked and all NFTs have been harvested in a few weeks.

In November the next NFT staking will start: GAT holders can stake their GAT for the next Game Ace:

Some of you are already having fun with the second GameAce game “CryptoSnake“, that was available for staking GAT at MintedVodka (or by buying it directly on the market, if you are impatient).
To make it more fun, we have decided to start another GameAce challenge!

Both have been around since the early days of GAT Network and supported the project as Mods.

Our roadmap got some new milestones. Make sure to have an eye on the roadmap since we will add features regularly. You find it at the main page of our website (scroll down a little). We try to put items on the public roadmap that can be delivered within a few months + some major topics. The rest is at an internal roadmap to avoid too much competition 😉

Together with new roadmap items come new use cases for GAT:

Just to let you know: Lately GAT Network bought back GAT for 20 BNB. We will probably continue to do so whenever there is a good opportunity. No financial advice

In October Pete conducted a survey in the community in order to shape new Arena configurations. The survey has been evaluated carefully and as a result a new Arena will launch in early November!

During September and October the Alchemy Arena Activity Challenge was ongoing and ended October, 31st – 6,000 GAT can be won! The winners will be announced in early November.

Our website became pretty slow from all the content and information we provide there. Thanks to some maintenance it is lightning fast again https://gat.network

As usual there are several contests and giveaways ongoing or about to start. You find an overview on the giveaways here