What are Special Toys and how can you get them?

What many players are not aware of:
The Alchemy Toys Blockchain Game (part of the GAT Network) has a special built-in ability for up to 63 Special Toys.

These are NFTs that go beyond the usual gameplay of Alchemy Toys.

They do not have any function in the current game (but some of them may have one in the upcoming games) — so they are pure collectibles as of now.

You can get such Special Toys for example by meeting special conditions, like using a hidden recipe.

One such Toy already exists: “The Dragonslayer” . You will receive a Dragonslayer whenever you melt 2 Golden Dragons. 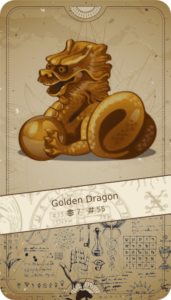 Since hidden recipes are part of the game logic, those Special Toys are not limited. Their serial number (#) increases each time they are minted.

Yet most Special Toys are limited. The maximum supply is written on the card.

Another way to get them is winning a Challenge or get an Airdrop… Sometimes they are also available at the Marketplace by people who have won them.

Unlike the game´s toys they are marked with a trophy symbol instead of level number next to the serial number (#). Also the lower end of the Special Toys is black.

Over time more Special Toys will appear (63 different types in total). You find an overview here

GAT Network is funded and has a long-term multichain/ cross-chain vision for NFT trading & gaming centered around GAT and the highly flexible Minted Vodka exchange. We refrain from hypes and pump & dump mentality and concentrate fully on building great technology and on organic growth.